Akiko grew up near Osaka, where she lived with her great-grandmother. In a home steeped in Japanese folklore, Shinto and Buddhist religious practices, she developed an intimate connection with her country’s traditional culture from a young age.

In her late-teens she began her interest in other cultures, initially fostered by high school English studies and, subsequently, as an undergraduate on a bilingual program at Kwansei Gakuin University. Graduating in Policy Studies, Akiko moved to Tokyo to start her career, as a corporate strategist first at a large multinational organisation before joining a fair trade company. After eight years in Tokyo, she moved to Okayama, a rural prefecture in west Japan, to take up a position at a renewable energy enterprise. The year she spent there re-established her connection with Japan’s traditional way of life, including its local customs, festivals, arts and ceramics.

A yearning to further her education and expand her horizons led her to the east coast of the U.S., where she took a Master’s Degree in Environmental Economics and Policy at Duke University in North Carolina. Her studies included an economic evaluation of forestry conservation policy in Panama, which involved many months’ arduous walking through mountainous regions to interview villagers.

Over the next five years Akiko was employed as a public policy analyst at a research institute in Washington D.C., where she specialised in climate change policy in the forestry and agricultural sectors in Latin America. Outside of her professional life, she apprenticed with a herbalist and studied with wilderness educators. In collaboration with a local non-profit organisation she developed a tour of Washington D.C. for Japanese to learn about Native American culture, and launched a sustainable fair-trade fashion project in collaboration with an indigenous tribe in Panama.

In 2016, Akiko decided to embark on a three-year journey around-the world. Her exploration led her back to Central America, then Mexico, Europe, India and Asia before finally returning to Japan, when she undertook training in the traditions of the Yamabushi, Japan's mountain ascetics. Now based in Kyoto, she leads yoga and meditation retreats, practices Butoh contemporary dance, and volunteers on an organic farm and also for a wilderness education non-profit organisation.

Akiko joined Walk Japan as a Tour Leader in 2019. 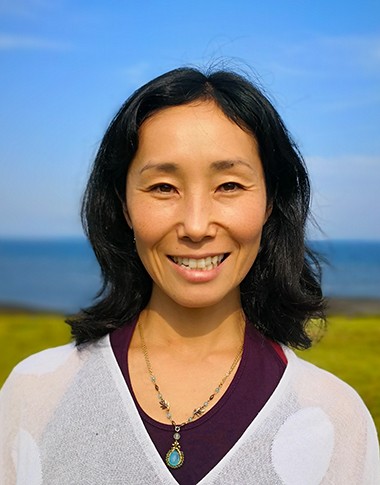