A walk through beautiful Tohoku in northern Japan.

The Basho Tour: Narrow Road to the North is a fully-guided tour suitable for anyone who is an occasional walker and can walk for more than three to four hours in comfort. In general, the route is gently undulating but it also includes some short, steeper climbs. Please read more on Tour Levels here.

A 7-day, 6-night tour starting in Sendai and finishing in Yamagata. Tour accommodation is in hotels, Japanese inns and Shinto shrine lodgings. The maximum group size for this tour is 12 persons. We have no minimum size. If we accept a booking we guarantee to run the tour.

Basho's most famous poetic travelogue, Narrow Road to the North, is one of the great works of Japanese literature. This 7-day, 6-night fully-guided tour takes us on a unique, authentic experience following in the footsteps of seventeenth-century Japanese poet, Matsuo Basho (1644–1694). The walking is along quiet country lanes, forest trails and mountain footpaths; all easily enjoyed by regular walkers. Like Basho, we take delight and inspiration from some of the greatest scenery to be found in Japan including Matsushima, one of the classic Three Views of Japan, and the sacred mountains of Dewa Sanzan.

Besides the beauty of the countryside we travel through and the haiku poetry of Basho, we also learn of the tumultuous history that wreaked destruction but also nurtured the tough spirit and culture of the people of Japan’s northerly regions. The Basho Tour also features visits to onsen thermal hot spring resorts, stays in Japanese inns and sumptuous Japanese cuisine.

We meet in Sendai and travel through Matsushima, Hiraizumi and the Dewa Sanzan before finishing our journey in Yamagata. Walk Japan provides detailed instructions on how to reach the tour accommodation on Day 1. 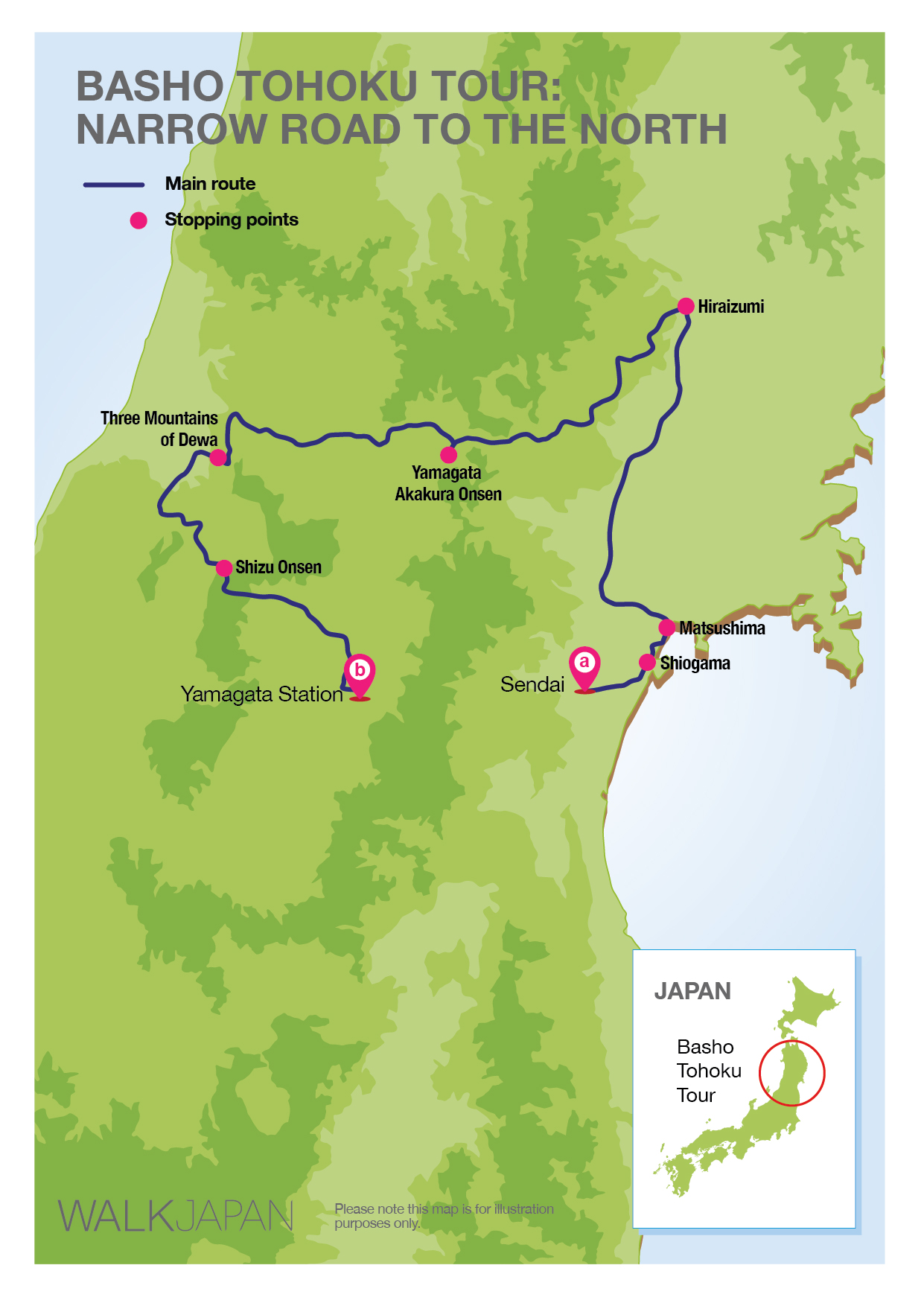 The itinerary for the Basho Tour (2021) is ground-only, beginning in Sendai and ending in Yamagata. Prior to the tour, Walk Japan will provide detailed instructions for travelling to the meeting point in Sendai from Tokyo’s Narita (NRT) and Haneda (HND) Airports.

Meet in Sendai in the lobby of our accommodation at 6:00pm for the tour briefing, which continues over dinner with your tour leader in a local restaurant. With a population of one million, Sendai is the largest city in the Tohoku region. When Basho visited, it was a much smaller settlement, but expanding quickly as a hub of culture and commerce in the North due to the efforts of the ruling Date (pronounced dar-tay) clan.

Following breakfast at our hotel, a local train takes us on a short journey from Sendai to Kokufu Taga-jo Station. Before starting along the path Matsuo Basho (1644–1694) took to Shiogama, we also take some time to visit the excellent Tohoku History Museum and stroll through the remains of Taga-jo Castle.

At Shiogama we board a boat that wends its way along the spectacular coastal route Basho also took from Shiogama to Matsushima. Matsushima, its bay dotted with a multitude of pine tree-covered islands, is one of the Three Views of Japan. Basho relates that he had longed to visit here and with good reason; it provides one of Japan’s classically beautiful vistas. Basho, though, overcome by Matsushima’s beauty, was lost for words and never put pen to paper here.

Our accommodation for the night has relaxing onsen thermal hot spring baths and dinner is a gourmet feast of Japanese cuisine.

Following breakfast, we walk to Zuigan-ji temple, where caves, carved into a rock face, once accommodated monks in ascetic retreat. We move on to the nearby Entsu-in, famed for its beautiful gardens that include a heart-shaped pond.

We depart by train mid-morning for Hiraizumi, another UNESCO World Heritage site. During the reign оf the Fujiwara Clan (866–1184), Hiraizumi wаs said tо rival Kyoto іn grandeur and sophistication. Today, the only significant reminders of this past glory аre the temples оf Chuson-ji and Motsu-ji.

We lunch in the grounds of Motsu-ji temple among the foundation stones of the many buildings that graced this once-grand temple. However, the elegant garden representing the Pure Land Buddhist paradise has been restored to its twelfth-century splendour. Next we follow a delightful walking trail to Chuson-ji. The temple’s Konjiki-do, or Golden Hall, has been reconstructed and is probably the most elaborately decorated Buddhist structure in Japan. While walking, we learn about the decline of the Fujiwaras, the demise of Hiraizumi as a cultural and religious centre and Japan’s Warring States Period (approx. 1450–1600). Here, Basho composed his reflection on impermanence:

Summer grass,
All that remains of a warriors dreams.

Another feast tonight in our modern Japanese-style accommodation, again with onsen baths.

An early start for train transfers, including a short and very rapid shinkansen bullet train journey, to Naruko Onsen. Here we walk from the site of Shitomae-no-Seki, an Edo Period (1603–1868) checkpoint, along a well-maintained trail linking valleys and crossing forest streams on the old Dewa Kaido highway, to what was the home of a senior local official. Basho stayed here on his travels, which from the poetry associated with his visit does not sound so glamorous:

Fleas and lice, horses urinating,
Close by my pillow.

Unlike Basho’s slumbers, our evening accommodation is a very comfortable traditional Japanese inn with onsen baths.

After breakfast we walk over the remote Natagiri Pass, once notorious for its difficult terrain and banditry. Basho thought he would not survive his travels and never more so than on this day. Today, although starting off with a short steep climb, the path is generally an easy undertaking and any chance encounters always friendly.

After descending we transfer by taxi to the Mogami-gawa river. Like Basho, here we board a small boat to navigate down this still-mighty waterway.

On to Mt. Haguro-san, a sacred mountain, which we ascend to our accommodation up a long series of stone steps through this spectacular Shinto shrine complex. The surrounding area is known as the Dewa-sanzan, Three Mountains of Dewa – Mt. Gassan, Mt. Yudono-san, and Mt Haguro-san – and is one of the most important centres in Japan of Shugendo, a Shinto-Buddhist ascetic and mystical practice. Like many travellers of his day, Basho was a pilgrim of sorts and often relied on the hospitality of locals. The tradition of pilgrimage along the great highway systems of Japan became important in the Edo Period, and we spend the night in similar fashion to Basho; enjoying a simple but delicious fish and vegetable dinner and sleeping in unembellished Japanese-style accommodation.

For those who wish to attend, morning Shinto prayers are held in the main shrine room before breakfast. The morning prayers are an unusual experience for both Japanese and overseas visitors alike. After our simple vegetarian breakfast, a dedicated vehicle remains with us today as we explore the Rokuju-ri Kaido, an ancient trail connecting inland Yamagata with the coastal Shonai plain.

Our walk undulates through cedar and beech forest with, weather permitting, spectacular views of Mt. Gassan before we transfer to our comfortable lodging at Shizu Hot Springs. Hot spring baths and delicious local cuisine await on our final night together, reliving the highlights of the tour.

We transfer together from the accommodation to Yamagata station after breakfast, where we arrive in the late morning. The tour ends here, with onward travel by shinkansen bullet train easily accomplished. Your Walk Japan tour leader will assist in the purchase of your tickets and make sure you know what to do to complete your journey smoothly.


This itinerary is subject to change.

The itinerary for the Basho Tour is ground-only, beginning in Sendai and ending in Yamagata.

The pre-tour pack includes detailed instructions, including a map, for travel to the accommodation at the start of the tour.

Please note that travel by train from Yamagata station to Narita Airport via Tokyo station takes approximately 4 hours and to Haneda Airport approximately 3.5 hours. Yamagata airport is much closer, but has limited flights - please contact us for more information.

Single supplement: Available on a limited basis from JPY44,000. Please contact us for more details.

Group size and guarantee: The maximum group size for this tour is 12 persons. We have no minimum group size. If we accept a booking we guarantee to run the tour. See Booking Conditions.

Please note that values shown here are indicative only

View All
Find Out More