A hiking tour to Koyasan, the sacred Kumano Kodo Pilgrimage and Ise Shrine.

The Kumano Kodo Pilgrimage tour is a fully-guided tour suitable for anyone who is a regular walker in reasonable health and able to participate in four to six hours of walking. The route includes some uneven ground and a number of steep ascents and descents. Please read more on Tour Levels here.

Tour accommodation is in hotels, a temple and Japanese inns. The small, intimate nature of the inns makes the maximum group size 12 people. We have no minimum size. If we accept a booking we guarantee to run the tour.

The Kumano Kodo Pilgrimage tour is a fully-guided walking tour between the vibrant modern city of Osaka, the mountain temple community of Mt. Koyasan and the Japanese Imperial shrine at Ise. UNESCO includes only two pilgrimage routes in its World Heritage list. One is the famous Camino de Santiago through Spain's northern provinces. The other is the Kumano Kodo, a journey through a thousand years of Buddhist history on Japan's beautiful Kii Peninsula, which connects these iconic sites.

Koyasan, Kumano and Ise are places where Buddhism originated in Japan. In the sixth century, Buddhism was not just a spiritual and religious philosophy, but a facet of continental civilisation that contributed to the advancement of Korea and China and therefore was very desirable to Japan.

Saicho (Tendai) and Kukai (Shingon), two priests close to the Emperor of Japan, were given the task of introducing new forms of Buddhism after the capital of Japan moved from Nara to Heian-kyo, now known as Kyoto. In the early Heian period (794–1180) both Saicho (787–822) and Kukai (774–835) advocated secluded religious practices in mountainous regions and many temples were built on mountains such as the Tendai complex on Mt. Hiei and the Shingon complex on Mt. Koyasan. Koyasan was at the very beginning of Buddhism in Japan.

As Buddhism grew, so did the belief that priests who had undergone severe ascetic practices in the mountains were particularly efficacious. The mountains of Kumano, covered by beautiful forests and threaded by rivers and streams, were the cradle of mountain asceticism where priests who had undergone severe asceticism practices were considered to have shugan supernatural powers. So the words shugenja (one who has acquired these powers) and shugendo (the way of mountain asceticism) came into use and formed a major part of Japanese Buddhism. In the Kumano mountains, disciples began to physically traverse the route to enlightenment and paradise and add the physical experience to the mental practices. Kumano is an area so steeped in history and Japanese Buddhism that the visitor becomes immersed in the atmosphere and can easily imagine the steps of the emperors and pilgrims that walked the same paths.

The arrival of Buddhism in Japan had to contend with the worship of mountains, landscapes and sacred entities that had been practised for centuries by all walks of life in Japan. Kumano was the geographic area where Buddhist and non-Buddhist institutions and practices, particularly Shinto, interacted. Ise is the most important Shinto shrine in Japan and its forests of sacred Japanese cypress trees were worshipped in the earliest times.

The Kumano Kodo's verdant mountains, quiet valleys, roaring rivers and plunging waterfalls provide us with a spectacular landscape to explore while thoroughly imbuing ourselves in the region's rich, ancient history and charming rural life. As with all Walk Japan’s tours, the Kumano Kodo Pilgrimage is a fulfilling and enjoyable experience of another little-known part of Japan.

The itinerary for the Kumano Kodo Pilgrimage tour is ground-only, beginning in Osaka and ending in Ise. Prior to the tour, Walk Japan will provide detailed instructions for travelling to the meeting point in Osaka from Osaka’s Kansai Airport (KIX) and Tokyo’s Narita (NRT) and Haneda (HND) Airports. At the end of the tour, travellers are advised not to book themselves out on an early morning flight as it can take up three hours or more to travel from Ise to Kansai Airport and longer to reach airports in the Tokyo region.

Please note that on Day 2 and Day 7 our main baggage will be shipped in advance overnight. On these days you will need to carry all items you require overnight and your daypack should be sufficiently large to accommodate these items.

The tour starts with a meeting and full tour briefing at 6:30pm in the lobby of our hotel in Osaka. This is followed by an evening foray into the dining and drinking district of downtown Osaka for our evening meal. We dine at a lively izakaya restaurant, a popular destination for many Japanese. The large and varied menu is sure to cater to everyone's tastes.

After breakfast we first transfer by train for a journey of approximately 1.5 hours to Mt. Koyasan and our walk, a 7.5km pilgrimage trail around the perimeter of Koyasan that was originally established for women. The ascetic training ground of Koyasan was prohibited to women until 1872, and the precipitous path offered them great views of the important mountain sites without needing to set foot in forbidden areas. We continue on to Koyasan's Okunoin, an inner sanctum that includes the mausoleum to the founder of the Shingon Buddhist sect, Kobo-Daishi.

Our accommodation tonight is a comfortable shukubo pilgrim lodgings, which provides us with delicious shojin-ryori vegetarian temple cuisine and an introduction to the spiritual life at Koyasan.

For those who wish, we join early morning prayers, which are followed by breakfast. We have time to enjoy Koyasan's environs before transferring by vehicle to Takijiri-Oji, stopping for lunch on the way.

We begin our exploration of ancient pilgrimage trails of the Kumano Kodo at Takijiri-Oji, where a steep but not too long a climb to a ridge awaits us. We climb at an easy pace to the top, from where the trail is much gentler for the rest of our walk today. Reminders of the old route, including Buddhist statues, line our route along the way to our destination of Takahara, a rural hamlet noted for its ancient shrine surrounded by giant kusu-no-ki, camphor trees.

Leaving Takahara on foot, we head higher into the mountains along the pilgrimage trail. We continue to pass by reminders of the old highway, including an ichirizuka distance marker, before descending to our lunch spot, which serves local delicacies.

Continuing on, we crest the Hashiori-Toge pass after a short climb. At the top of the pass is an unusual statue of an emperor sitting astride both a horse and cow. Our descent takes us along a cobbled path and staircase to Chikatsuyu, a small village. Our final stretch of the day takes us on a climb to Tsugizakura-Oji , famed for its giant cedar trees and a thirst-quenching spring. From here we transfer by vehicle to Yunomine Onsen, where we stay for two nights. The onsen thermal hot spring baths found here are an important part of pilgrimage tradition, being used in purification rituals in preparation for visiting the grand Hongu Taisha Shrine, which we visit tomorrow. The onsen also offer us a fabulous way to relax after today's exertions before enjoying our sumptuous evening meal, created from local ingredients.

Following breakfast at our inn, we take a local bus to the beginning of today’s walk, which follows a ridge through verdant forests and isolated village communities. Panoramic view are afforded us at many points on our walk and at Fushiogami we gain our first view of the giant torii shrine gate at Hongu Taisha.

Our path descends to the Taisha. In contrast to the torii, which is an imposing structure towering 33.9 metres high above us, the Taisha is composed of simple elegant buildings that are seemingly at one with the surrounding forests. Depending on our reserves of energy, we either return to our accommodation on foot via the Dainichi-goe pass and Yunomine Onsen, or make the journey by private vehicle.

A leisurely start for a late-morning walk up to Hyakken-gura, which provides some of the most spectacular views of the tour. From here the trail continues on a forest track and eventually descends into Koguchi, an isolated village surrounded by mountains and rivers.

Our accommodation tonight is the most unusual of the trip; a redundant junior high school that has been renovated into a comfortable, if basic, lodge. Our hosts are, as ever, friendly and serve hearty local food.

An early start for today’s walk, which is the toughest of our journey and includes a 2.5 hour uphill climb that rises 800 metres. The walk continues through forests and along ridges, the path ascending and descending, until we reach the top, from where we can see over mountains to the Pacific Ocean. The trail descends to Nachi Taisha shrine, Seiganto-ji temple and the spectacular Nachi-no-Otaki waterfalls, which have an uninterrupted drop of 133 metres.

We transfer by vehicle to Kii-Katsuura on the Pacific Ocean coast. Here we stay the night in a modern hotel complex with onsen baths for us to luxuriate yet again.

A relaxed day compared to yesterday’s exertions. Nevertheless, there is an early start for those who wish to visit the local fish market, if it is open, to observe the largest tuna auction in Japan. The auction is dependent on the weather, which can preclude fishing boats leaving harbour, and also holidays.

We return to our hotel for breakfast, before taking a local train to nearby Shingu, where the last of the three Kumano Shrines, Hayatama Taisha, is found. The final climb of our tour is a short but very steep ascent of Mt. Gongen to Gotobiki Iwa, a giant rock that is revered as a natural deity.

We continue on by train to Ise, home to the most important shrine in Japan. Following an exploration of the Geku, the impressive outer shrine, we check into tonight's accommodation, a hotel, before venturing into town for our final evening meal together.

Breakfast in our hotel is followed by a visit to the Naiku, Ise's inner shrine. The tour finishes around noon, but the city has plenty more to explore if you wish to spend further time here on your own.

Express trains connect Ise to Nagoya, from where onward shinkansen bullet trains speed to Kyoto and Tokyo. Your tour leader will help you organise your tickets and advise how best to travel as required.

This itinerary is subject to change. 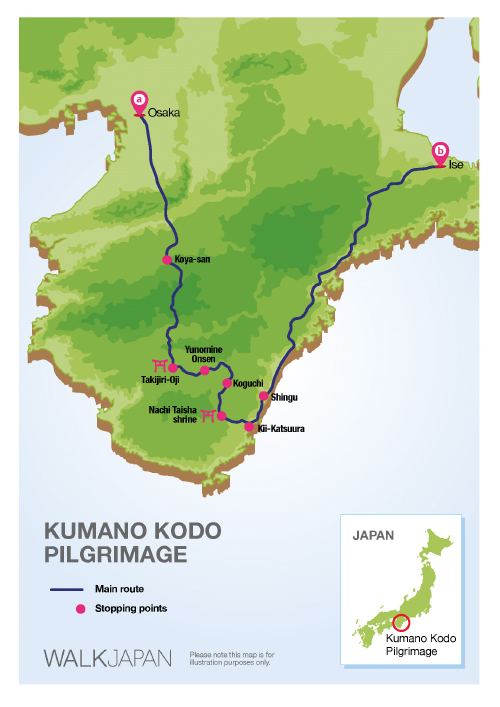 The itinerary for the Kumano Kodo Pilgrimage tour is ground-only, beginning in Namba in Osaka and ending in Ise.


The pre-tour pack includes detailed instructions, including a map, for travel to the accommodation at the start of the tour.

Tour participants are advised not to book themselves out on a morning flight at the end of the tour as the tour does not finish until approximately midday and the journey from Ise to the nearest international airport takes approximately 2 hours 30 minutes.

Single supplement: Available on a limited basis from JPY34,000. Please contact us for more details.

Group size and guarantee: The maximum group size for this tour is 12 persons. We have no minimum group size. If we accept a booking we guarantee to run the tour. See Booking Conditions.

Please note that values shown here are indicative only

View All
Find Out More