Originally from Virginia, USA, Diane first arrived in Asia as a young adult and has lived in the region ever since. In 1987, she moved from Manila, where she had spent over a decade establishing and working in mission schools, to Tokyo. Kagoshima City in the far south of Kyushu became her home from 1995. Here she raised her family of eight children, educating them at home in English to complement their learning in Japanese at the local schools.

Diane has a deep love of the natural world and delights in exploring the numerous waterfalls, hiking paths, and Edo Period (1603-1868) roads of the Kagoshima region. These adventures have taken her to the volcanoes of the Kirishima National Park, the limpid aquamarine waterfalls of Ogawa-no-taki in Osumi and the other-worldly, primeval forests on Yakushima, an island that inspired Hayao Miyazaki in the making of his film Princess Mononoke. These travels provide inspiration for her website, More than Tokyo, where she writes about Japan's regions.

Now that the last of her children have grown into adults, Diane keeps herself busy teaching English at homes for the elderly and the disabled, at kindergartens, and privately. She also likes to read, write, swim, and listen to audio books, particularly The Great Courses educational series. She is a keen home cook and at her youngest son’s request has published a recipe book, titled Recipes for Denny. From time to time, she has to set to clearing the ash that rains down around her house from neighbouring Sakurajima, one of the most active volcanoes in the world.

Her parental duties fulfilled, Diane now has the time to travel further afield and re-indulge her wanderlust. She joined Walk Japan as a tour leader in 2018. 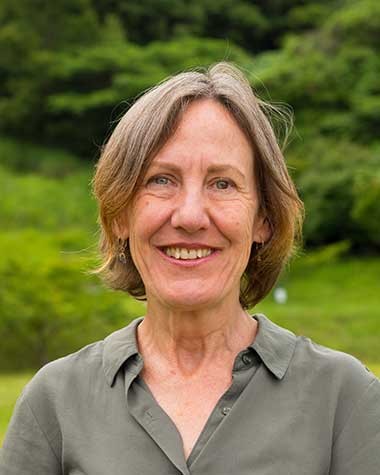