Born and raised in Okinawa, Yo quickly became fascinated by foreign cultures as both his father and grandfather were painters who had travelled extensively around Japan and Europe. Their stories of adventure, especially overseas, enraptured him. At four years old, he was enrolled in an international school and remained studying there until graduating as a high school student. With his education entirely in English surrounded by friends of different nationalities he was only instilled with further interest in the world beyond Japan. From his days as an elementary student, Yo stayed every summer holiday with the families of school friends living on US military bases in Okinawa. By the age of twelve, when he made his first visit overseas to friends in the State of Georgia, he was already very comfortable in American surroundings. While still at high school, Yo began riding a moped. Having decided not to attend university, on graduation he took a job as a chef and waiter in a local izakaya restaurant and began to save money. Within a few months, he had enough money to embark on his first adventure; a tour of Japan on his moped. His leisurely travels allowed him to luxuriate in the variety and beauty of the Japanese countryside and come to know and love his homeland better. Hokkaido, with its wide, wild landscapes and snowy climate, so different to the sub-tropical climes where he had grown up, were especially exciting for Yo. Towards the end of his six-month odyssey, a friend contacted him with an unexpected suggestion: that the two should open their own restaurant. Relishing the opportunity, he agreed and they opened a French-style café in Okinawa. After several successful years, the two decided to expand their business to include a travel agency, so Yo took a year away from the café to gain experience in the sector and also a travel agent’s licence. This achieved, Yo set out for Europe. Having upgraded his moped for a car, he set off on another road trip. Over the seven months, he travelled through many countries in Eastern Europe and the Balkans, finally reaching France via Italy. The relaxed French way of life, its atmospheric, small villages and family-oriented, work-life balance appealed to him greatly. On returning to Japan, he and his business partner decided to go their separate ways allowing Yo to focus on a career in the travel business. Yo lives with his wife and young daughter in Oita. In his free time, he enjoys playing basketball with a local team and is also a keen amateur photographer with a penchant for shooting on black and white film with vintage cameras. 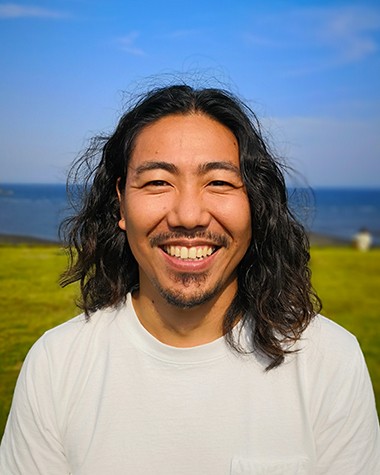