Jon was born and raised in Melbourne, Australia. During his childhood he travelled with his family around much of his country, which awakened his wanderlust. After graduating in Education from Melbourne University, he taught for a number of years in primary schools before embarking on a more substantial journey to the Americas and Europe. Until this time Jon had only been overseas on a few short forays to China and Vietnam. Starting in Chile, he travelled on to Peru, the USA, UK and Italy. Jon relates that the highlight of his trip was a trekking tour to the famed Machu Picchu and that the bonds he formed with fellow hikers, the tour guide’s insights and the contemplative moments afforded by the walking left a lasting impression on him. After returning to Melbourne, Jon found work with a high-end, domestic renovation company. He found the work very satisfying, having inherited from his grandfather a love of woodcraft and construction, and stayed with the company for seven years. During this time he met and married his wife and they started a family. After the birth of each of their three children they travelled to Japan, his wife’s home country, to introduce their latest offspring to her family. On these and subsequent visits Jon became involved in local festivals and other cultural events. Many of these were held at shrines and temples, which first drew his attention to the artistry and extraordinary skills embodied in traditional Japanese carpentry. When their youngest child was almost two years old, Jon and his wife decided to move to Japan so that their children could engage fully with their mother’s culture. They spent an initial year in Yokohama, where Jon enjoyed being a stay-at-home father whilst studying the Japanese language. Tiring of the hustle and bustle of city life, they moved to rural Kochi Prefecture in Shikoku, Japan’s fourth main island. Jon returned to teaching as an English language instructor at high schools in the Shimanto-gawa river valley, one of the most picturesque regions of Japan. In his spare time he began tending his own vegetable garden, which he found to be satisfying and rewarding; not only did his family enjoy the freshest vegetables they had ever eaten, but through common endeavour it also proved an excellent way to build relationships with neighbours. Increasingly comfortable in their new lifestyle, Jon and his wife decided to seek a traditional Japanese house to renovate as their family home. Their search took them to Kyushu, where they finally found a 100-year-old farm house in Usuki in Oita Prefecture. Jon is renovating the house, using a combination of traditional and modern techniques, while teaching english to employees at the local machinery company, writing online articles and helping other local businesses with translation work. Although only newly a resident, he was honoured to be included in both the largest and most ornate of Usuki’s festivals; as a member of the team carrying an omikoshi portable shrine during the Gion Matsuri and also as a carver of some of the 20,000 bamboo lanterns on display during Takeyoi. Jon has established a new vegetable patch and begun cultivating shiitake mushrooms. He also enjoys making udon noodles, miso paste and umeboshi pickled plums with his children.

Jon joined Walk Japan as a Tour Leader in 2019. 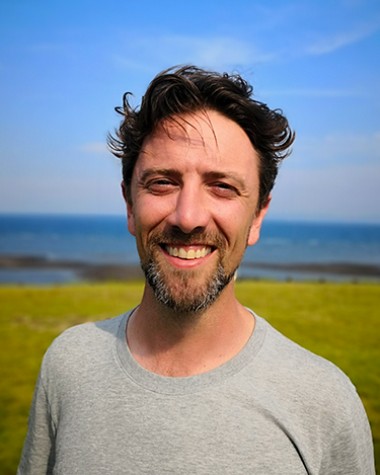